DNE a group formed by ex MNL48 members Ash and Faith to fight HHE due to copyright issue. 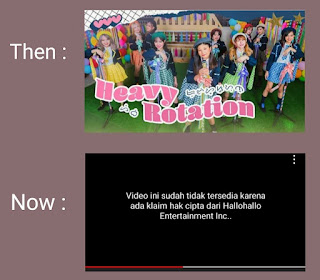 Day Night Explorers or abbreviated as DNE is a duo group formed by Ash (Ashley Cloud Santos Garcia) and Faith Shanrae Santiago since leaving MNL48 back in 2019.
Ash, at that time were having controversial moment with MNL48 before leaving.
They became a duo group and regularly released their own singles.
In their latest project, together with other ex-MNL48 members, they made a sing & dance cover of the AKB48 song "Heavy Rotation" by arranging the music.
Unfortunately, after a few days and reaching 10,000+ views, their video was taken down due to a copyright claim from HalloHallo Entertainment, MNL48's agency.
In most cases it is usually AKS (Vernalossom) or Avex who sued the copyright for the song "Heavy Rotation".
Many fans are wondering why this can happen?
Considering that MNL48 has not officially released the song "Heavy Rotation", DNE rearranged the song's music and sang it in Japanese.