K-Pop fans made up story Yabuki Nako bullied in HKT48

Yabuki Nako hit by fake news says she got bullied by other HKT48 members. 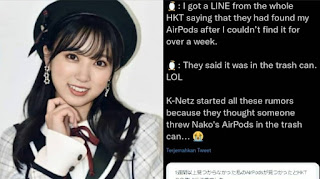 Recently, rumors are being discussed among k-netz, these unbelievable rumors say that Yabuki Nako was bullied by other HKT48 members.
It is said that HKT48 members bullied Nako into throwing Nako's AirPods into the bin, then Nako was made fun of for using Korean.
Surprisingly, this rumor is only popular among Korean fans.
Until then this rumor was published by one of the so-called media also reported this hilarious rumor.
Seen some hate comments appear on the HKT48 YouTube videos.
Some 48 Group fans speculated that this rumor was made to bring down HKT48's name.