Former SKE48 Yamada Juna is on her way to the prison. 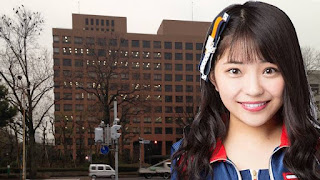 Former SK48 member Yamada Juna reportedly cried in court.
Juna was sentenced to 1 year and 6 months in prison, her lawyer hoped for a suspended sentence.
Decision will be made on December 2nd.
Yamada Juna and 3 other people acknowledged the contents of an indictment for financial fraud involving binary options at Nagoya Court on June 25.
It is alleged she deceived a man, contacted via a dating site, about making money.
They were alleged running a binary options financial scheme, that may have cost 100 people about 58 Million Yen (US$530,000).