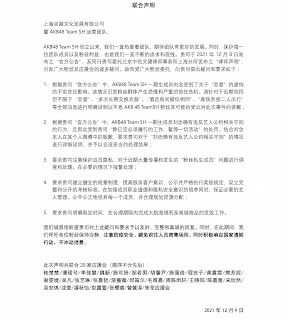 AKB48 Team SH warned fans that they will take legal action regarding Liu Nian scandal.
Team SH says Liu Nian violated the group rules and is taking hiatus.
However the fans are not afraid of management threats.
They insist that justice must remain. They want to make sure there are no playing favorites by management since Liu Nian ia number 1 in Sousenkyo.
Fans want justice for how the other members were punished more and even kicked out of the group for the same issue. Different treatment.
Fans reacts:
"One rule for top members, and one for another."
"This unequal treatment has always been happened in most 48 Group."
Joint statement on the picture was made by 29 fan clubs demand explanation in detail for:
- Lending and borrowing clothes multiple times for a long period of time.
- Suspicion that Liu Nian stayed in the same hotel room with him.
- The high-speed rail trip Liu Nian took as a couple.
The fans were also furious as:
Team SH says Liu Nian isn't dating
But they said Liu Nian to violated artist code
Team SH refused to say what she violated
Liu Nian to demote herself for hanging out with him
But he is not Liu Nian's boyfriend.