Liu Nian scandal got her suspended from all activities with AKB48 Team SH, management investigating. 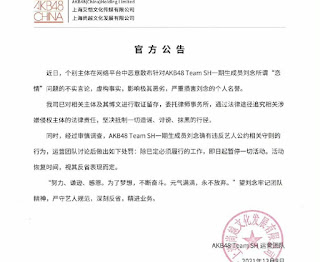 Following scandal rumors that have been circulating, AKB48 Team SH management have issued a statement and decided to suspend all Liu Nian's activities.
All of her SNS accounts will be temporarily suspended.
Liu Nian were previously exposed in a dating scandal with her accused boyfriend.
She also posted fishy Weibo post that give a hint she didnt want to stay with Team SH.
Team SH Statement: "Liu Nian, a member of AKB48 Team SH has violated the rules of Artists Convention. Management made following punishment: Except for the work that has to be done, all of her activities will be immediately suspended. Liu Nian's return will be depends on her self-reflection."
Update from Liu Nian:
"I have no romance with him. We are only best friends, but we should have thought more about the distance between male friend. Now I voluntarily asked to be demoted to a trainee. I hope the company will approve my request."