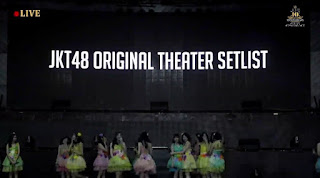 After a decade in the industry, JKT48 will finally gets their first original theater setlist.
This was announced during their 10th Anniversary Kick-off Conference concert today.
The setlist will contains only JKT48 original songs.
Announcement was so emotional given how tough it was for them to get 1 original songs for the past 10 years and now they're about to get 16 original songs.
More details to follow as it will be started in 2022.