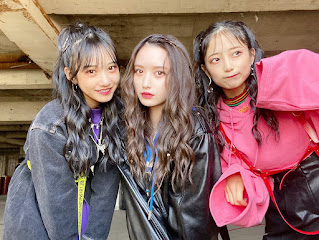 It is reported that post Yokono Sumire scandal, NMB48 management interviewed Suchan.
It's also revealed that Yamamoto Mikana and Namba Hinata were also having related connection to Johnny's talent.
NMB48 then gathered members, Suchan and Hinacho were not attending, but Mikanyan was there.
According to Bunshun, at that meeting instead of apologizing, Mikanyan made senior members who are usually calm like Shibuya Nagisa were so upset.
Suchan and Hinacho were finally graduated, whilst Mikanyan took a break due to her physical condition but then returned to the group's activities.
Mikanyan, who was pushed by management and is chosen in the new NMB48 song "Muchujin" is said to have annoyed some other members.
The atmosphere in NMB48 is said to have not been conducive since the Yokono Sumire scandal with two men, there was a movement of members to report other member scandals because management was called unfair.