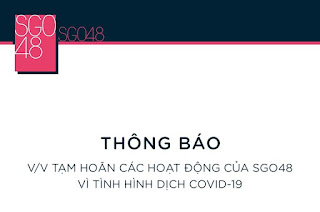 YAG or SGO48 management sent an e-mail to all SGO48 2nd Generation audition applicants regarding the cancellation of the entire 2nd gen audition series.
This is due to the pandemic which limits all SGO48 activities and the lack of income for the group.
Last April, SGO48 had planned the selection of 2nd Generation members and senbatsu for the 4th single.
But unfortunately, in June they stopped all activities due to the pandemic.
Even so, they still run digital content so that fans can enjoy SGO48 content.
Many fans were disappointed that the management made a promise but broke it because the management made a profit from selling CDs and votes for auditions but canceled it.
This cancellation of the audition, lack of any action on original song "ABCDEF" and the absence of SGO48's participation in the AKB48 Group Pokemon tournament made SGO48 rumored to be on the brink of the Disbandment.
Update:
SGO48 to officially disbanded. The group ends their journey on December 22nd. Members and management apologized to the fans and provided an explanation through official Facebook post on what happened.
All of SGO48 members will be declared graduated.