CGT48 Chengdu will finally coming as part of SNH48 Group

STAR48 will re-start CGT48 Chengdu as part of SNH48 Group, here is the details. 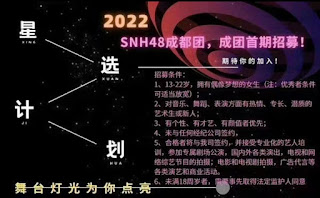 CGT48 Chengdu and WHN48 Wuhan were supposedly to be 5th and 6th SNH48 Group project back years ago.
In 2018 CGT48 had started their own project like theater building, everything went downsized.
But in December 2019, CGT48 project been fully canceled as STAR48 deregistration of it's process.
And in this big 2022, STAR48 starts hiring a manager for where the office is stated to be in Chengdu.
STAR48 will also registering another group's legal process for their subsidairy.
STAR48 will also hire a managing director for CGT48.
As per reports, Chengdu has the highest SNH48 fans density than any other cities in China bar Shanghai.
At the same time the 1st generation audition will also be held.