HKT48 senior member Kumazawa Serina to graduate from the group. Serinu graduation stage has been scheduled, here is the details. 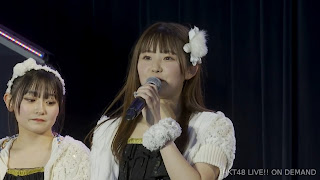 On today HKT48 Team KIV "Seifuku no Me" show at the theater, Kumazawa Serina announced she will graduate from the group.
She said, "I would like to take a new step in entertainment as a voice actor."
Serinu graduation concert will be held on 25 March 2022.
Kumazawa Serina joined HKT48 as part of 1st generation member, promoted to Team H in 2012 and transferree to Team KIV during 2014 Team Shuffle.