Shanghai idol group SNH48 planning for big project as part of their 10th anniversary, here is the details. 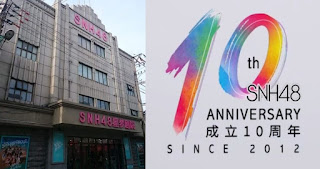 At the end of the "SNH48 Group Request Time Best 50" event tonight, it was announced the plans that has been prepared in order to welcome the SNH48 10th Anniversary.
Here are some of the announced plans:
• 10th Anniversary Special Show
• 10th Anniversary Album
• 10th Anniversary Special Mini Live
• 10th Anniversary Merchandise
• Best Partner Season 2
• Talkshow Special Planning
• Online & Offline Xingmeng Carnival
• STAR48 Family Concert
• MVP Theater was upgraded to MVP Of The Year, where all sister groups participated.
• Construction of a new studio building "SIBA Creative & Cultural Park" with an area of ​​15,000 m² in north of Shanghai.
This building will later become the group's operations center that is integrated with various functions such as lodging, arts and creative places, areas for practicing singing and dancing, shooting areas, recording production areas, webcasting, commercial public areas, etc.
After the construction is complete, in the future this place is also predicted to be the largest idol industry in Asia.
This innovation park will greatly improve the efficiency of business operations within the group, then improve the quality of service for fans, and become a place of development for the development of the three business sectors being carried out.
The details of the plan will be announced during 2022, and there may be other plans that have not been mentioned tonight.