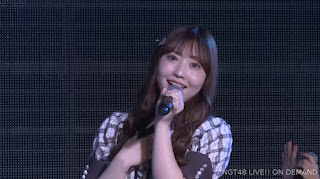 NGT48 member Kusakabe Aina has today announced that she will graduate from the group.
Ainya says, "I will retire from entertainment."
She adds, "I have thinking about graduation since a year ago."
Kusakabe Aina graduation schedule will be held at the end of April 2022.
She joined AKB48 as part of Baito AKB and debuted back in October 2014, was announced as NGT48 1st generation Kenkyuusei in August 2015.