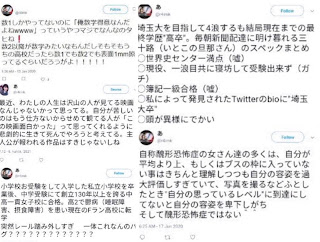 Although the rumors circulating may not be completely true, they are said to have given a negative image to the group. 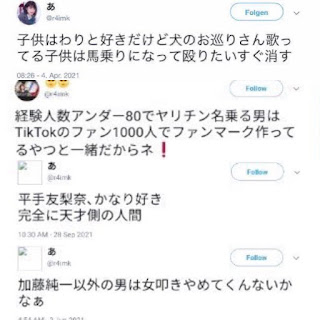 A lot of pictures and her tweets talking gibberish about women in the past could be backfire to her.
She also making fun of disabled people. A lot screenshot of of her unacceptable tweets in the past are now everywhere. 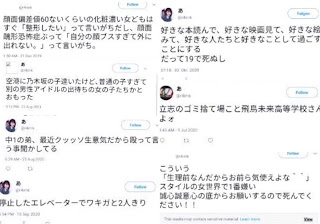 This below one is the worst, pure racism to black people. She said, "Whenever I go to Harajuku, there is always black people who look like they gonna kiidnap me, maybe because I have defenseless face.." (via: Web Archive).

She also posted her own unnderwear on her old Twitter account.
Nakanishi Aruno's background already made the fans scared when she was introduced.
Rumors circulated in forums about Nakanishi Aruno that in the past she's holding individual photo sessions at a rate of 3000 yen per hour.
On SNS the fans already selling some of her individual photo session. 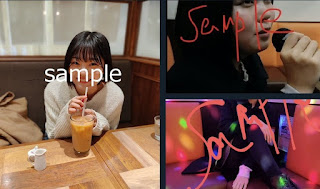 According to reports, Sony employee says management were against the selection of Nakanishi Aruno.
The old man couldn't move on from Hirate Yurina.
Fans believe as Nakanishi Aruno is the only 5th generation member with short hair she's prepared to be center for Nogizaka46 29th single as Yasushi Akimoto likes girls with short hair. 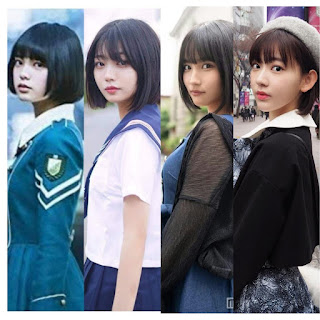 There is probably more to come as local media already started gathering information.
Here's update from Nogizaka46 official website as they refrain Nakanishi Aruno from all of the group's activities. 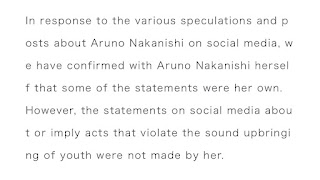 The management issued a statement about the ongoing issue.
It is said that the person, Nakanishi Aruno herself admitted that a part of the rumors/gossips that we've seen were completely true.
Therefore, since she is still categorized as minor, for her own good, they put her under "hiatus" status.
They decided to keep her in the group since none of her scandals were against the law (their privacy law).