GNZ48 6th Anniversary concert "You Are My Starlight" and events

Guangzhou's GNZ48 to celebrate their 6th anniversary concert live with some events will also be held. 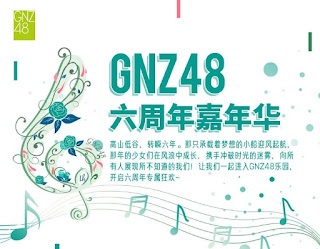 GNZ48 will hold a special 6th Anniversary celebration events and concert "You Are My Starlight".
This concert will be divided into 2 events:
1. You Are My Starlight
This concert will hold by GNZ48 which is shown as a thank you from the GNZ48 members who had been elected in the 2021 General Election.
2. What They Don't Know About Me
This is the 6th anniversary event of GNZ48, in this event all the dreams and feelings of all members will be expressed.
In addition to commemorating the group's 6th Anniversary, GNZ48 will also hold a special stage to celebrate the 6th Anniversary of GNZ48 Star Dream Theater hosted by the 3 Teams.
• Team G: Performances that will bring classic songs.
• Team NIII: A show that will bring a dazzling performance.
• Team Z: Performances that will excite you.
In addition, GNZ48 will also release their 1st Album to commemorate the 6th Anniversary as well as several other merchandise including:
• Photopack
• Gift Pack
• 1set Album Photopack