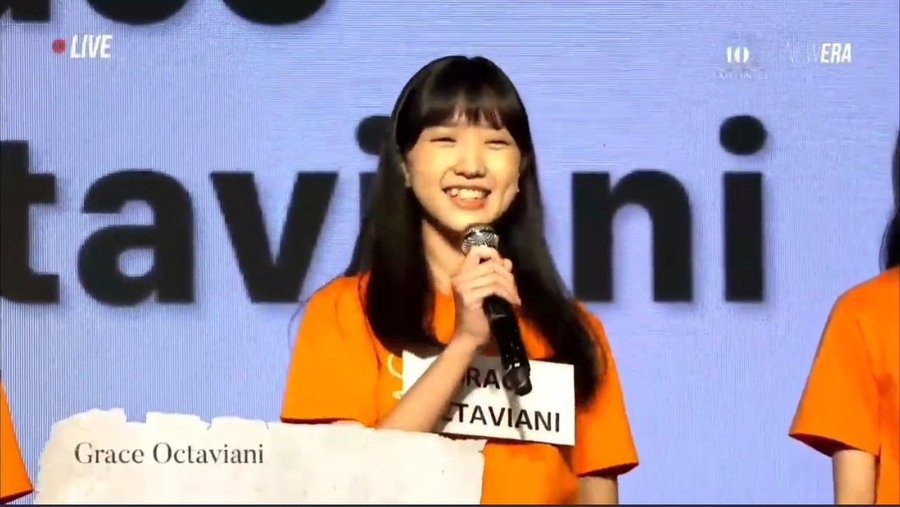 Profile of Gracie aka Grace Octaviani from JKT48 11th generation, a new member who has been officially announced at the JKT48 Halloween Event.
We present the 11th generation Gracie JKT48 profile here for those of you who are fans and curious about this new member.
Here's a profile of Gracie JKT48 that you can check out.
Gracie herself was first officially introduced at the JKT48 Halloween Event, Monday, October 31, 2022.
Grace Octaviani along with thirteen others were introduced as new members of JKT48 11th gen.
Gracie has attracted many fans and fans since she was first introduced.
Gracie Octaviani or commonly called Gracie is a girl who is now 15 years old.
It is known that Gracie was born on October 18, 2007, so Gracie is included in the Libra zodiac girl.
Gracie, this beautiful girl with dimples and calls herself is the 11th member of the JKT48 11th generation to be officially introduced.
"Hello everyone... Greetings, my name Gracie Octaviani, you can call me Gracie. I'm 15 years old," Gracie said as an introduction at the JKT48 Halloween Event.
"My hope as a JKT48 trainee is that I can put on the best performance for all of you. Please support me, thank you," Gracie continued.
Gracie herself already has her own nickname from her fans, namely Marsha.
Gracie's introduction video on JKT48's official Youtube account titled JKT48 11th Generation Profile: Gracie, has received approximately 16 thousand views.
The introduction video also received 1.3 thousand likes and 235 comments.
In her introduction video, Gracie also revealed her jikoshoukai.
"Sweet as sugar, cute as rabbit. Xi xi xi... Gracie," she said in the introductory video.
The video also received a lot of comments and support from fans.