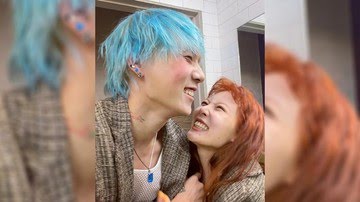 HyunA announced that she had broken up with DAWN on Wednesday (11/30).
The end of the couple's relationship was announced via uploads on social media.
HyunA uploaded a note with a black background and white writing that said she was no longer in touch with DAWN.
She only wrote three sentences in the upload on the social media.
"We broke up," HyunA sincerely at the beginning of the statement.
In the same upload, the Bubble Pop singer stated that she will continue to be good friends with DAWN in the future even though they are both no longer together.
"We decided to remain good friends and colleagues from now on," wrote HyunA.
At the end of the upload, she thanked everyone who supported them from the beginning of the relationship.
"Thank you for your continuous support and loving concern for us," HyunA concluded the announcement.
The announcement surprised many fans because HyunA and DAWN were engaged in February 2022.
At that time, the couple shared happy news by uploading photos and videos on Instagram.
Initially, DAWN shared videos and photos on Instagram of himself and HyunA with matching ring sets and the caption, "MARRY ME."
HyunA then re-shared the post by captioning, "Of course, Yes."
In another post, HyunA also shared a photo of a pair of matching rings and wrote, "Thank you, thank you, always thank you."
However, nine months after getting engaged, they announced their separation.
This made HyunA and DAWN end the relationship that had existed since six years ago.
They claimed to have been dating since 2016. However, the relationship was only revealed to the public in 2018.
"I knew Dawn when he was still a trainee. We appeared on stage together. Then we started dating in May 2016," HyunA confirmed in an interview as reported by Yonhap News, 2018.
"Our relationship then continued until we made music together. We were very, very careful. Even though he was not mentioned in the credits, there were parts on my solo album that E'Dawn assisted in detailing," she continued.
Meanwhile, until this news was written, DAWN had not provided any information or uploaded news about the end of his relationship with HyunA.