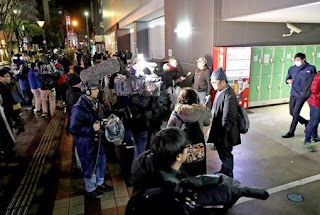 According to a number of reports the next internal NGT48 staff meeting will be held but the exact date is not yet known.

They will discuss a number of things including the problems of Yamaguchi Maho.

As for Yamaguchi Maho's apologizes it is probably normal thing in Japanese culture, they will feel guilty when making 'noise' or damage control.

This is compounded by AKS's track record and the management of the other 48 Groups. Every time there are cases involving internally they will make members as shields. This happened when JKT48 staff dated members, or when Yokoyama Yui apologizes for doing nothing.

Defense Alarm became a trending topic in Japan after management decided to implement it, then criticized by other artists including some former AKB48 Group members.

As for the scapegoat by far going to Imamura. Etsuro Imamura who previously had a position at SKE48 now serves as the theater manager of NGT48.

The fans asked him to at least issue a statement directly in public but in fact Imamura seemed to be hiding behind the stage.

Some other NGT48 staff were also disgusted by the incident, but like other workers in their group they had to be silent or lose their jobs.

A staff member even allegedly had to use an anonymous account on Japanese forum to voice his opinion that he felt an oddity in the NGT48 managerial at the moment for dishonesty and lack of decisiveness in this incident.

He said, Mahohon asked the staff twice in December to stop some of the men who went in and out of the dorm allegedly the boyfriends of several members involved. Several men even disguised themselves to be food couriers to enter the dorm and bypass the security check.

This was reinforced by several other members when Live Streaming on SHOWROOM broadcast feeling the men-voice in the next to their room. As far as we know suspect pointing out to Nishigata Marina, see here why.

He even hoped all the elements of Japanese media to keep pressing and voicing the incident until Mahohon gets justice. He is aware of the internal situation that management is currently trying various ways to think this case is over.

And he leaked the next NGT48 meeting held in the near future but he did not want to mention the exact date. He adds, management monitors the situation on the media and social media whether the hype of this incident continues or not, which will determine the final decision of the internal meeting.